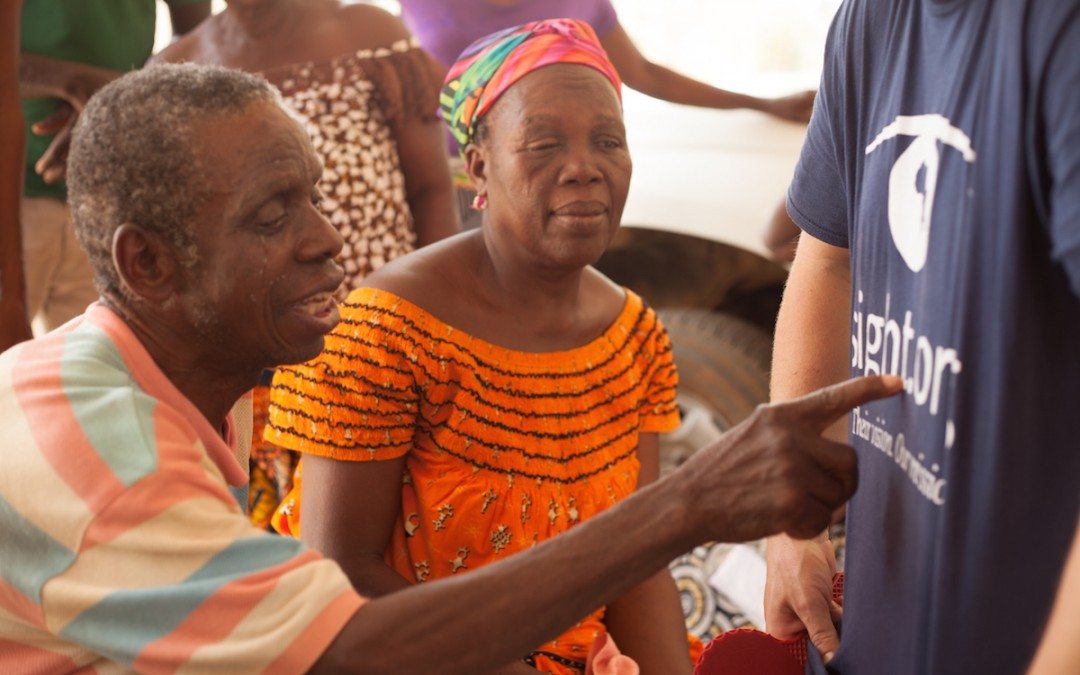 I couldn’t take my eyes off this adorable man. He looked like a ten-year-old boy stuck in a 62-year-old man’s body. He sat and stared upward into blindness with his mouth partly open. He looked innocent and sweet, but he had a big story. 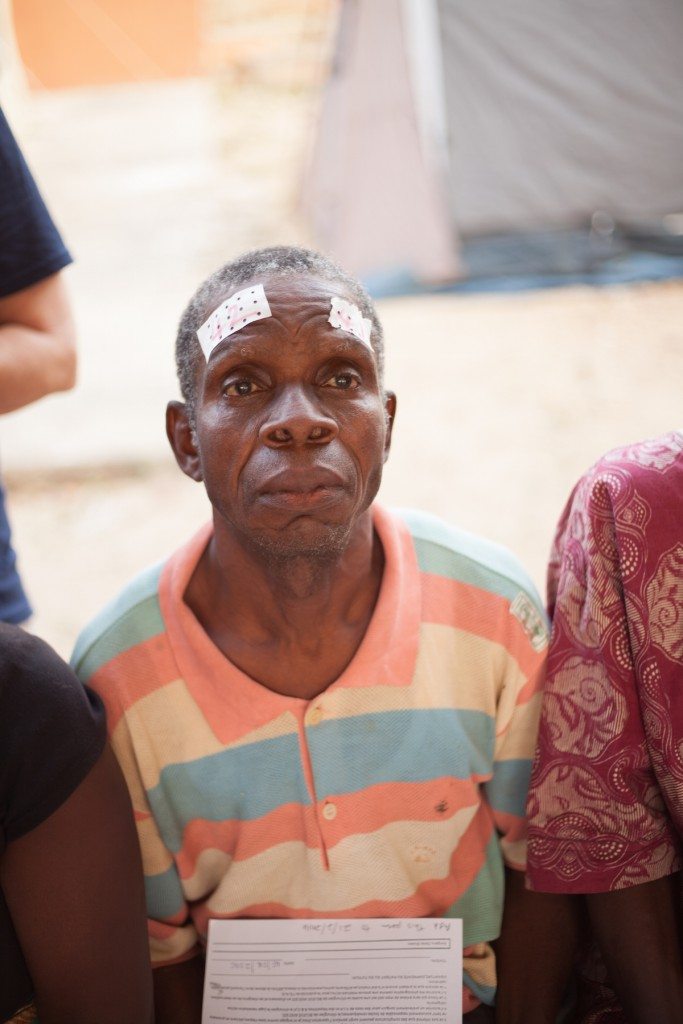 This man’s name is Nyatso. He came to our first day of surgery and was brought by his oldest living brother from the village of Oga. He was blind in both eyes and had been for many years. Often when we have patients who are blind in both eyes, they can at least see some flicker of light or hand movement. Nyatso saw nothing. But he could hear everything. As we played music and prayed to encourage the patients, every time someone said the name Jesus, his face lit up with a huge smile. He knew that God was with him and was about to heal him. 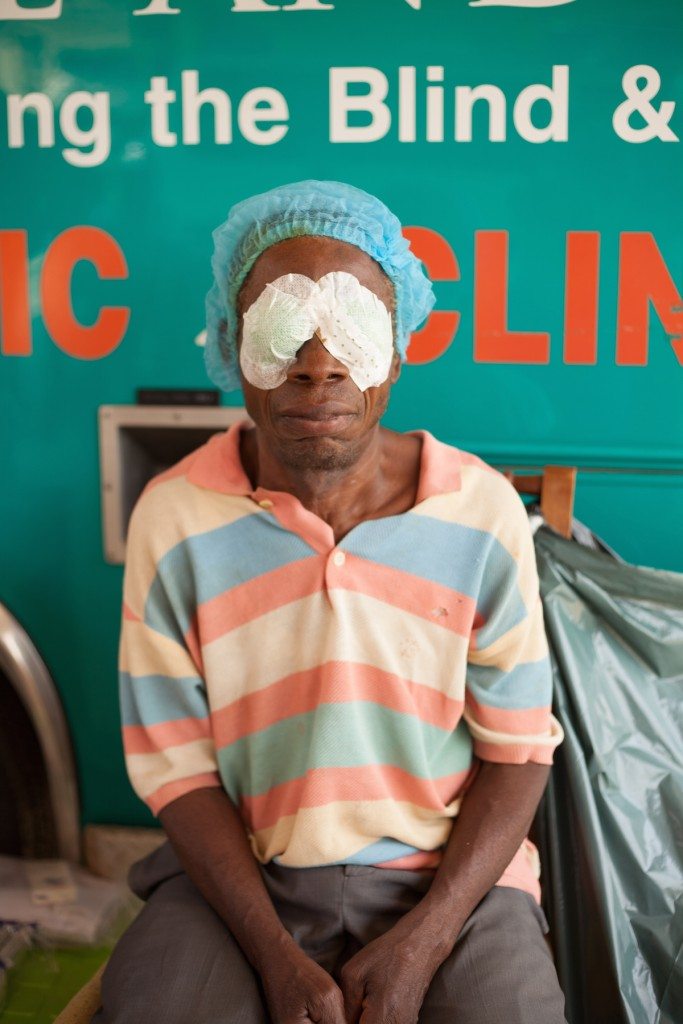 Everyone on the medical team and mission team was enamored with Nyatso. Something drew us all to him. We had to know his whole story. We asked him who was taking care of him, and he replied, “My eight-year-old nephew.” We all knew immediately what that meant for this eight-year-old boy. In rural Africa, this meant that the boy was not going to school so that he could take care of his uncle. 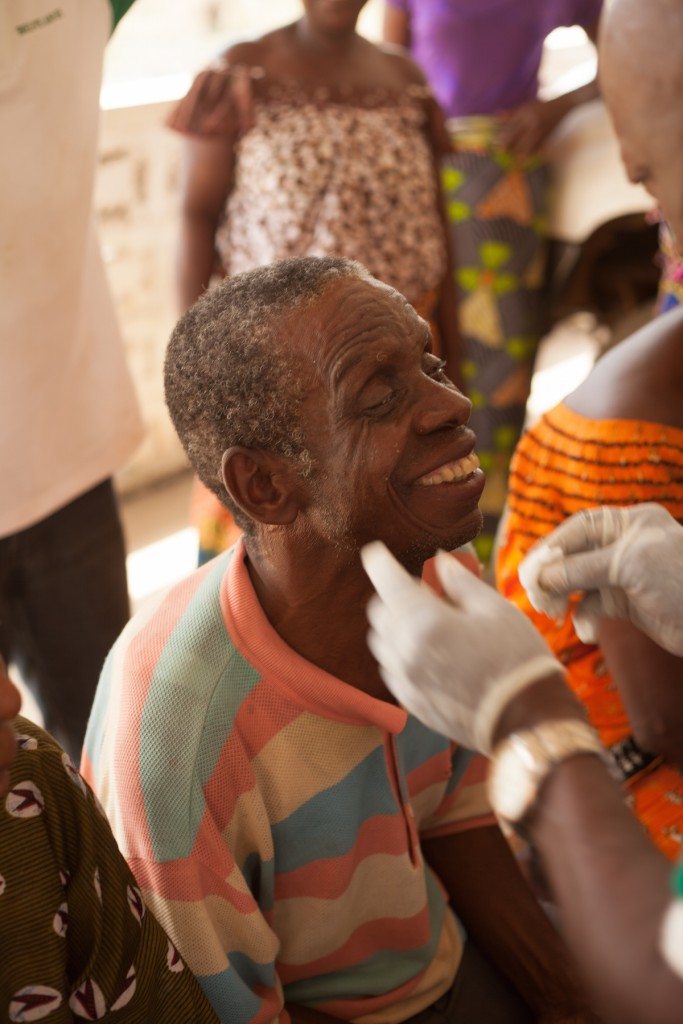 God was about to change not just Nyatso’s life, but also the life of his nephew. The medical team performed surgery on both of Nyatso’s eyes. The next day, as Papi took the bandages off, Nyatso couldn’t wipe the smile off his face. He wanted to point at everything. He saw Lewis’ t-shirt and called out every letter of S-I-G-H-T. 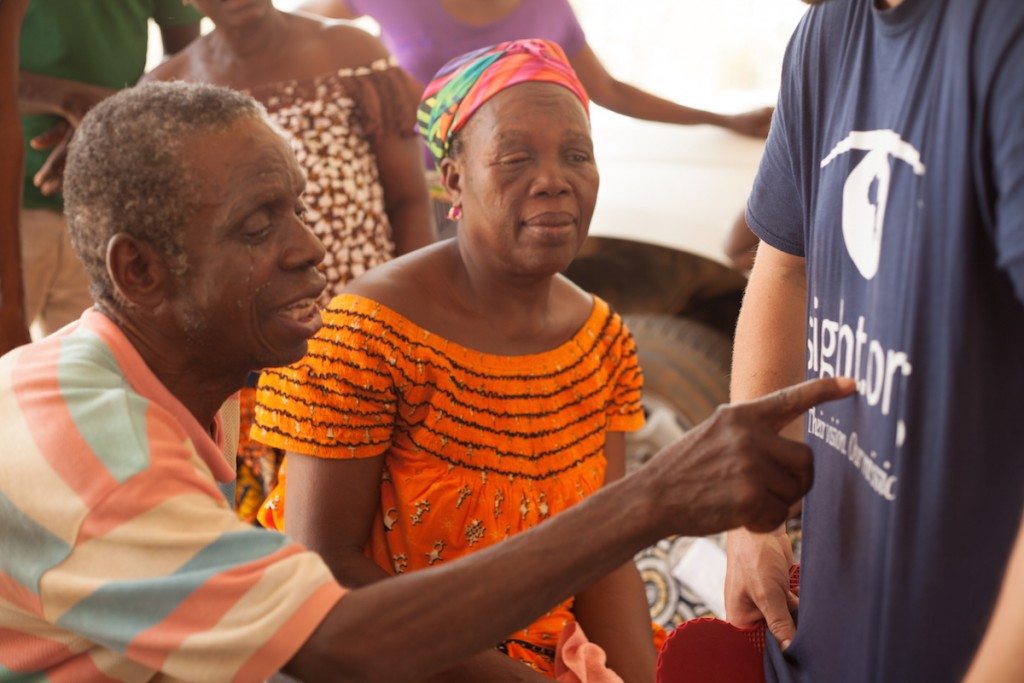 Then Papi did his post-operation test. Papi started out close to him, thinking that his sight might still be clouded, asking him how many fingers he was holding up. Nyatso had no problems seeing the fingers. Papi knew quickly that he needed to go straight to the eye chart. Nyatso kept going further down the eye chart until he got to the fifth line. 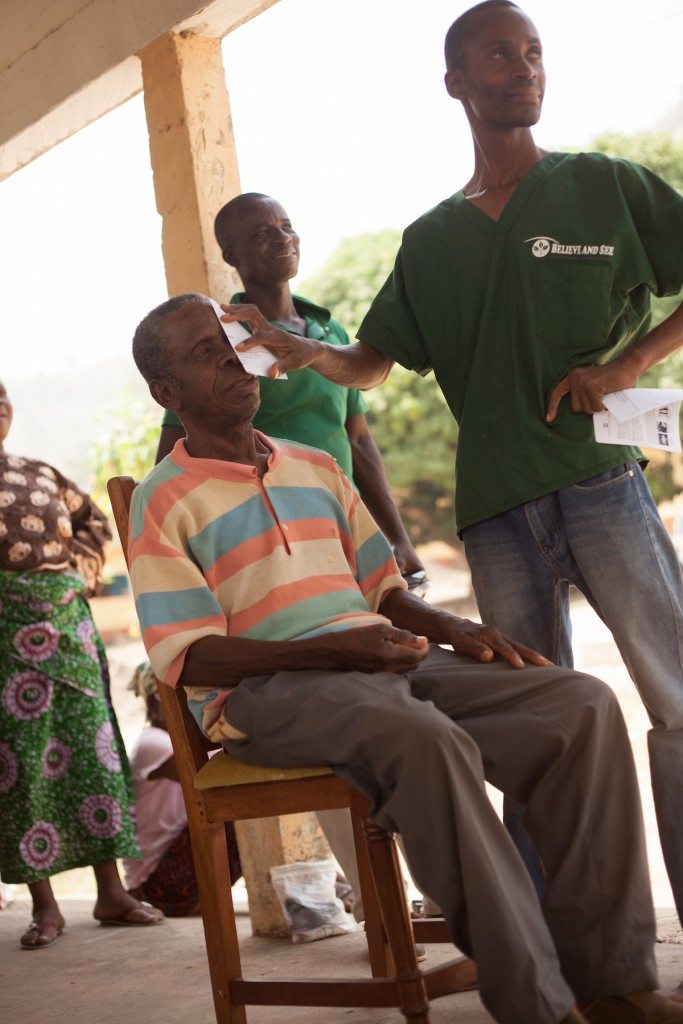 Papi squealed with delight, and then all the other observers responded with cheers and laughter. 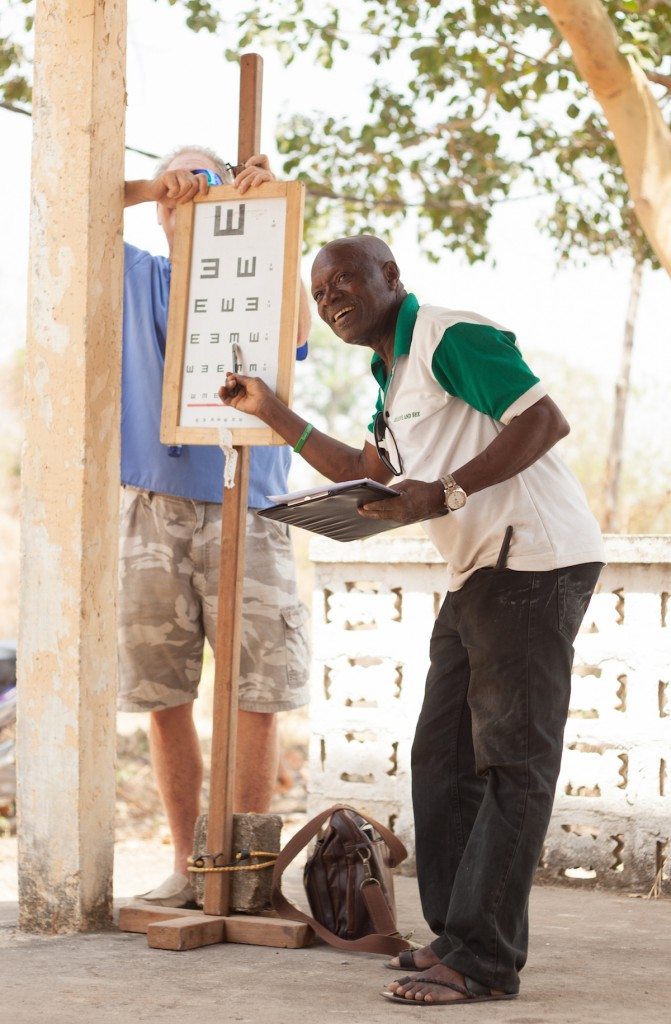 We all knew that God had done a mighty miracle that day. God set both Nyatso and his nephew free from bondage! 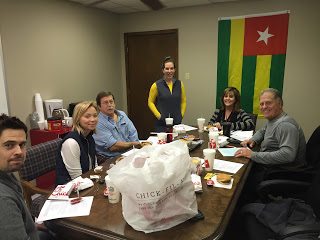 Getting Ready to GO!

Next week, we will have the 4 of our 7 mission team members on the ground in Togo. A few weeks later, the other 3 will be arriving. We would like to introduce you to the team and give you an idea of what they will be doing in Togo. 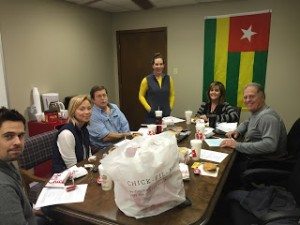 Lewis and Naomi Swann are the founders of Sight.org. They will be leading the team as well as supporting our medical staff in Togo. Read more of their story here.

Wayne and Elaine Riley will be living in Togo for the next year. They will be there to support the medical staff, help run the farm, assist in evangelism and discipleship in the villages, and help build new housing and facilities on the farm. Elaine has been on staff at the Sight.org office in Tyler for the last year. Read more of their story here.

Larry and Linda Payne will be on the first flight and are going for six weeks. They run a healing ministry in Lindale, TX and Linda is a Christian Counselor. They will be ministering to the team and assisting in evangelism and discipleship in the village. They are also praying that God will use his healing power through them as they meet people in need in Togo.

Beth Reed is our Communications Director and Volunteer Coordinator at our Sight.org office in Tyler. She has been to Africa numerous times but this will be her first time in Togo. She will be going with the Rileys on the second flight. She will be assisting our Field Journalist, Sametone Brunel, and coordinating their efforts to better communicate patient stories back to our supporters in the US. She is very excited to see the patients with her own eyes and get a feel for life in Togo. She will also assist in administrative work for pre and post-surgeries. Read more of her story here.

Please pray for our team as they prepare to go. We have set up a prayer calendar for the mission team and our medical staff. We will be sending updates as the team arrives next week. 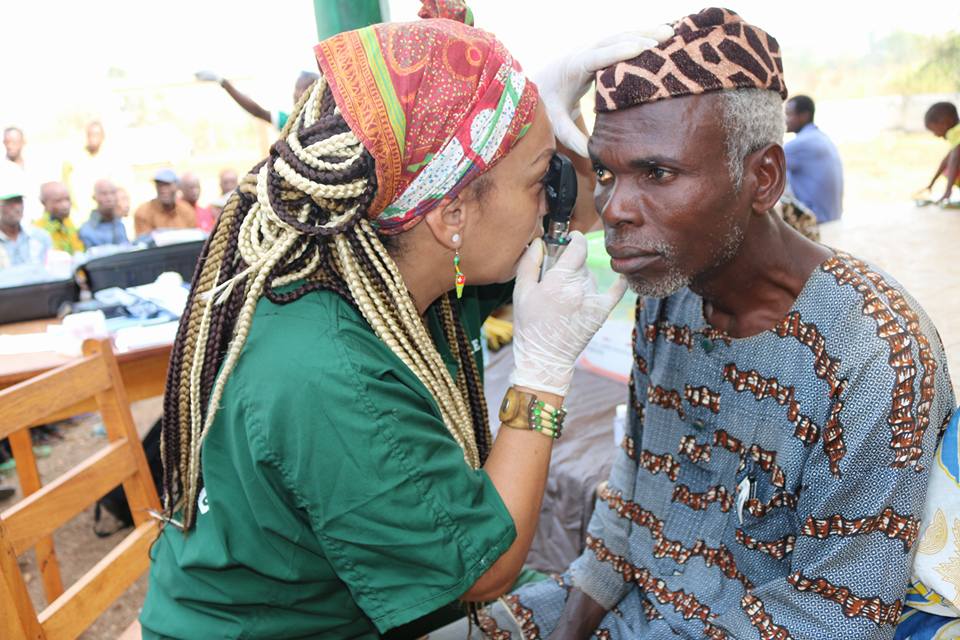 Our team started a new trip into the villages to do a new round of eye surgeries. It is normally a 6 hour drive but it turned into a 10 hour drive due to cow crossings, dirt roads, and other African adventures. They ended the day with a beautiful sunset and a beautiful village welcoming them. 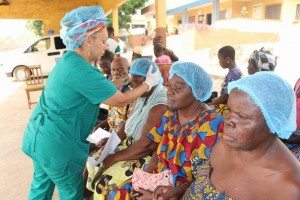 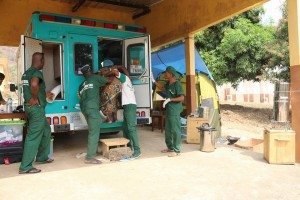 The first day of eye surgeries was a success! We are also thankful to hear that the new Department of Public Safety in togo is willing to stock the hospital pharmacy with glaucoma medication after Laurie gives him the outreach report from this round of surgeries. Our team is helping the government of Togo simply by showing up and identifying an issue. There is no eye care provider in this region, so the government didn’t even know there was an issue until we arrived. Praise the Lord for his provision! 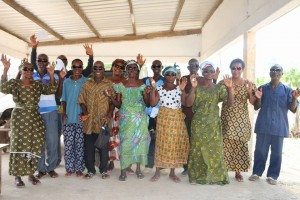 Our team provides free eye surgeries, but sometimes the patients are so thankful, they give gifts like this… 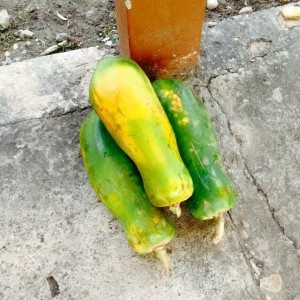 One of our patients was a farmer named Madam Lokou Padahou. She has been blind for a year and had never gotten to see her grandson. Our team did surgery on both of her eyes and she said,
“I can finally see my grandson, eight months after he was born. And I’m gonna be able to regain my fields.” 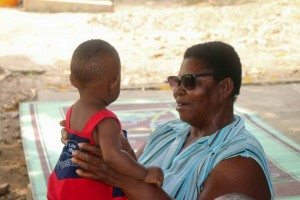 At the end of the week, our team had provided 36 eye surgeries. They are now back at the farm preparing for our missionaries, Wayne and Elaine Riley, to arrive next month. 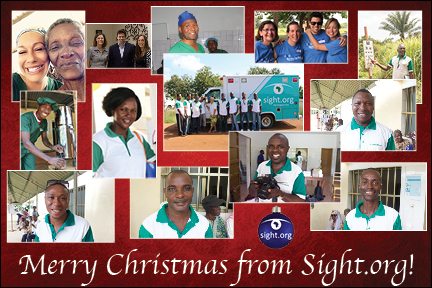 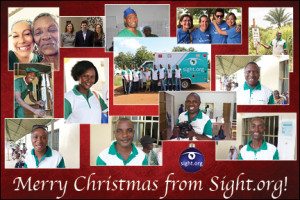 Merry Christmas, Joyeux Noel from our whole team! We know that Jesus came as a baby to this world to help the helpless, to love the forgotten, and to save us all from our sins. We are thankful that we get to be a small part of that this Christmas as we impact the blind, the unreached, and the malnourished in Togo, Africa.

Happy Thanksgiving to all our wonderful supporters!

We have a lot to be thankful for:

75 People professed faith in Christ for the first time

4 US team members at the Tyler, TX office

2 New missionaries being sent to Togo in February, 2016

All of these numbers were because of YOU! We can’t thank you enough. 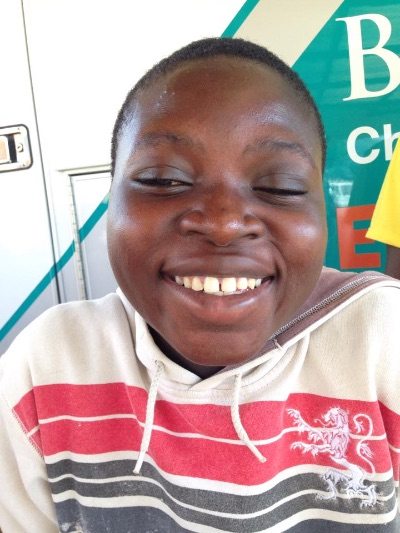 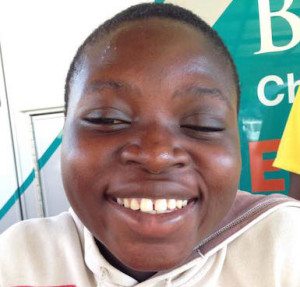 I am 12 years old. One month ago, I instantly went blind in my left eye. I was on my way to school when the traumatic accident happened.

The region where I live is called the plateau region of Togo, West Africa. We are known for our farming. To go to school is a privilege not obtained by many. Most children where I live farm, too. I was lucky to be a student. It made me and my mother so happy.

We are trying to build our new school, and we as students are doing most of the work. It is our job to create the clearing of the land and gather the lumber and carry the heavy wood loads atop our heads.

The other children were stronger than I and went running ahead of me. I tried to catch up, but I fell with my loads. As I fell my eye hit one of the large sticks that had fallen from my head.

The pain was so bad. I could only cry and felt left behind. Within days my vision went cloudy with the whiteness of a huge cataract. I have not returned to school since the accident.

As my vision left me, I knew I would never attend school again.

I was very sad and so was my mother. The area we live does not have eye care services, so when my mother heard from village neighbors that an American NGO, Sight.org, was at our local medical center, she took me.

I tried to be hopeful but it was hard as I sat and watched my mother pray for me mourningly.

The next day, I had surgery. We spent the night in a tent that Sight.org provided us to stay in. I had never slept in a tent before. The following day Papi took the patch off my eye, and instead of just seeing his torch light, I could see his hand movements. Laurie said, “Do not worry, it’s just the first day, it will get better.” She was right. I saw the team of Sight.org one week later, and now I can count Papi’s fingers from a two meter distance.

My smile is back and I am beginning to SEE hope of returning to school. Thank you, Sight.org! Please keep praying for me! 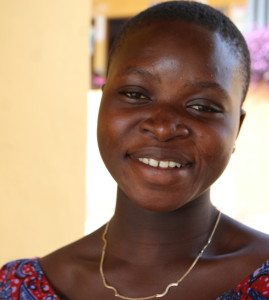