I met her huddled on a wooden bench under a thatched roof. She was sheltering from the heat of the day. Her name is Attitso. She is an old woman waiting to share her incredible story.

When I questioned her age she smiled. It had been so many years she had forgotten, however, she assured me she had it written down somewhere in her home. I tried to gauge how old she might be by the specks of white hair on her head and the wrinkles that adorned the corners of her eyes and lips. I couldn’t put my finger on it, but I knew this lady had a history.

For a start, she is the only person alive from her childhood family. She had lived a life story many would not have survived. This was her moment to reveal her memories.

Her life had been simple yet hard in a rural African village. As her story unfolded, I realized she had spent all her days never knowing what else this big world offered. For her though, it had offered little money in tough circumstances. 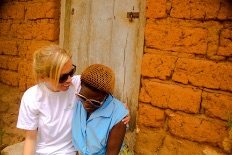 She was the youngest of only four children. Her mother sold water and her father was a palm tree farmer. Money was very hard to earn during her childhood. Poverty was a vicious threat. In fear for their lives, her mother went to work in the big city leaving them to be raised by her father. It was a testing time. Soon, her father grew tired of the family pressures. Work and childcare became a burden too great to bear alone so he sent a villager to bring her back. I wonder if her mother had a choice. Evidently, her mother would face the hardship of daily survival for herself and her children upon her return.

At this point, childhood memories faded rapidly. Maybe the trauma of poverty is locked away; too painful to remember. Eventually, she got married but instead of remembering her age at this life-changing event it was reported as bad. She repeated this several times. The memories of her hardships were stirring. She told me that typically the man works hard to win affection and makes big promises, yet once married it all changes for the worse. This is the only culture she knew. It’s the way of life.

After bearing three children with her husband his daily tormenting became difficult to bear. She began to feel trapped. In a country where it is common to have more than one wife she was torn between accepting the beatings and abandoning her children to survive alone. “He would often beat me, many times for no reason. I could not continue. I wanted to leave but I knew if I left, I would have to leave my children behind. It was a hard choice but I don’t regret it.” She left her family to begin again in a nearby village.

After a long harsh grief separated from her children her life moved on. From time to time she still hears from them. “There are no hard feelings” she sadly reflects. This is Africa. Hard choices often made to survive.

Eventually she re-married. She had eight more children with her new husband. Life became more stable. He farmed corn, yam and palm trees. She helped him in the fields for many years when she was still strong.

“When my body could no longer tolerate the long days in the fields I began to sell charcoal. I did this for many years.” He lovingly supported her until he passed away six years ago. As she spoke she shared that it was during that time that she began to lose her sight.

I asked her if she could no longer work when her vision became poor; “Even though I could not see well, I had done my job for so many years that my hands remembered what to do.” Despite her blindness she spent hours separating charcoal into bags to sell. Her hands moved in unison with her words as she described how she would work long tedious hours in the heat, separating charcoal. The years of working with charcoal had left its mark on her hands. This woman obviously labored many hours for a few coins. However, it was rare for her to go a day without selling a bag. She was fortunate the villagers were dependent on charcoal for cooking.

As her heartfelt story unraveled I suddenly realized that we had an audience. I wondered if the villagers knew her life journey or if they were hearing if for the first time. She didn’t seem to mind. In fact, I think she felt honored that the community valued her within the village.

It had been three weeks since we first came to the village. She was one of Sight.org’s first patients. I asked her if this surgery was available to her if we had not come to her village. Her lips grew tight and with a simple sway of her head she said, “No money. No money.” After many years of agonizing hardships there was hope on the horizon. From a world of darkness in her mature years finally there was light. Attiso’s sight was restored! 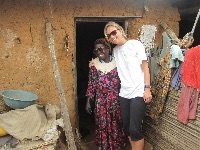