I get to go to Togo once a year. Last year, I went during surgery week. It was overwhelming to see people’s lives being changed in a fifteen-minute surgery. I had so many stories and photos when I came back because our eye surgeries make such a huge impact.

This year, I wouldn’t be seeing any surgeries. I was going for ministry week instead.

I have to admit that I was a bit apprehensive because I wasn’t sure if I would be getting many stories or photos. I’ve been working for Sight.org for two years, so I know that our ministry weeks make an impact, but it is not as in your face as our surgery weeks. I’m a preacher’s kid, so I’ve been around ministry my whole life. Ministry week didn’t feel like it would be as much of an adventure as surgery week was.

Boy, was I wrong.

Our eye surgeries are a doorway to ministry. These villages would not allow us to even enter without first doing eye surgeries. Through them, we build relationships and trust with the people.

After we spend several weeks in a village, they welcome us with open arms.

The first village I was in was called Landa. It is in the region of Elevagnon. Our ministry team has been in Landa since January. They have read the word with them, prayed with them, worshipped with them, and shown them the Jesus Film.

The first night I was in Landa, we watched a film called Mary Magdalene. Over fifty men, women, and children came to watch. As I sat with them and watched I had so many thoughts going through my preacher’s kid, Seminary trained brain.

“Ok, so this film is in their language, but other than that, how are they possibly relating to anything going on?”

“Everyone in this film is white, and I’m surrounded by Africans.”

“Shouldn’t we just be loving on these people instead of staring at a screen?”

“These children are staying up past their bedtime and it’s a school night!”

Obviously, I was overthinking everything.

I prayed through the whole movie and I tried not to let my skeptical thoughts ruin my first night in the village.

What happened next shattered all my skepticism.

When the film was over, our ministry team encouraged the people with the word, prayed, and then offered to give Bibles to anyone who wanted them.

A young man stood up and said, “We have heard you tell us about Jesus and we all believe. We have watched the Jesus Film and now this film, and we love everything that Jesus has done for us. Yes, we want Bibles, but we really want a place to meet! Will you please give us a place to read the Bible together and pray together?”

I have never heard anyone so hungry for the Word of God before. They were starving for more of Jesus.

I was completely humbled. Jesus was so much bigger than my skeptical thoughts.

We told them that we would be there again the next night and would set up a place for them all to meet and bring them Bibles. 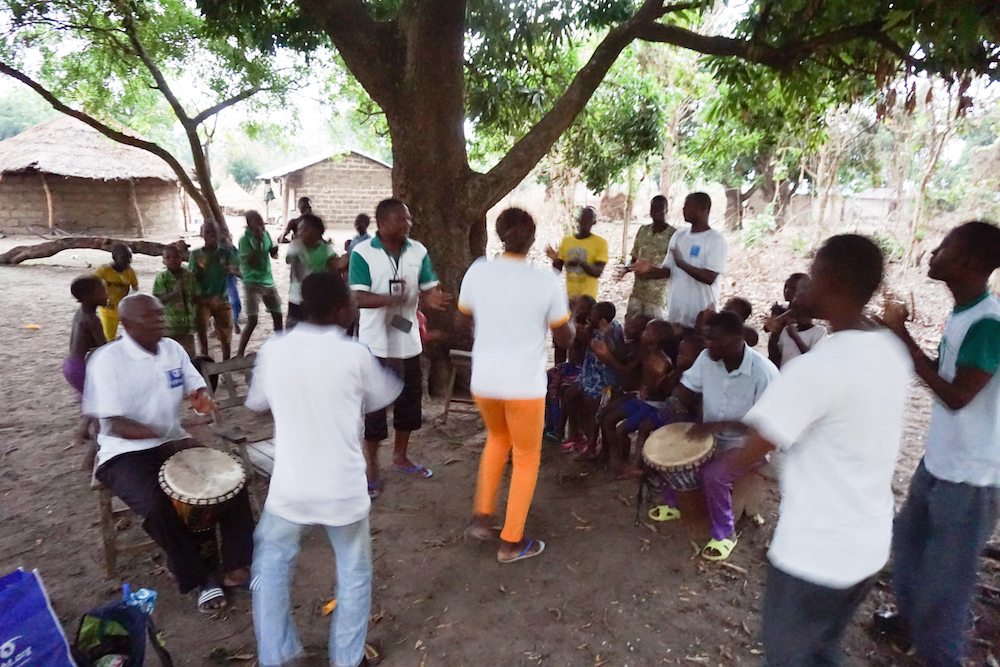 The next night, we met under a large mango tree. We sat down, started playing drums and singing.

At first, no one was there. But suddenly, one by one, they all came back. They truly wanted more of Jesus. We sang and prayed for an hour and then encouraged them with the word. It was so refreshing to be around a bunch of baby Christians who just wanted Jesus. They sang and danced for Jesus with all their hearts. 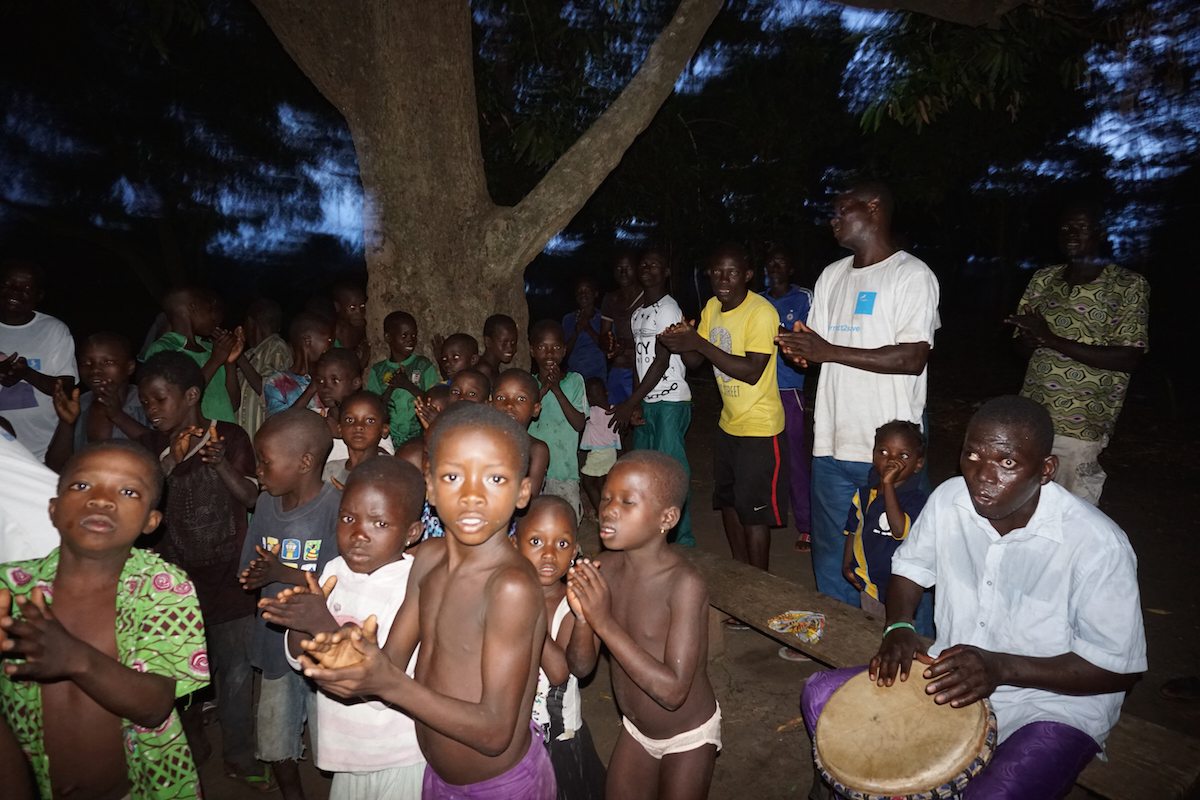 It started storming just was we opened the boxes of Bibles to give away. They all stayed, in the rain. They even stayed as we prayed over them.

They didn’t care about the rain because they wanted more of Jesus. 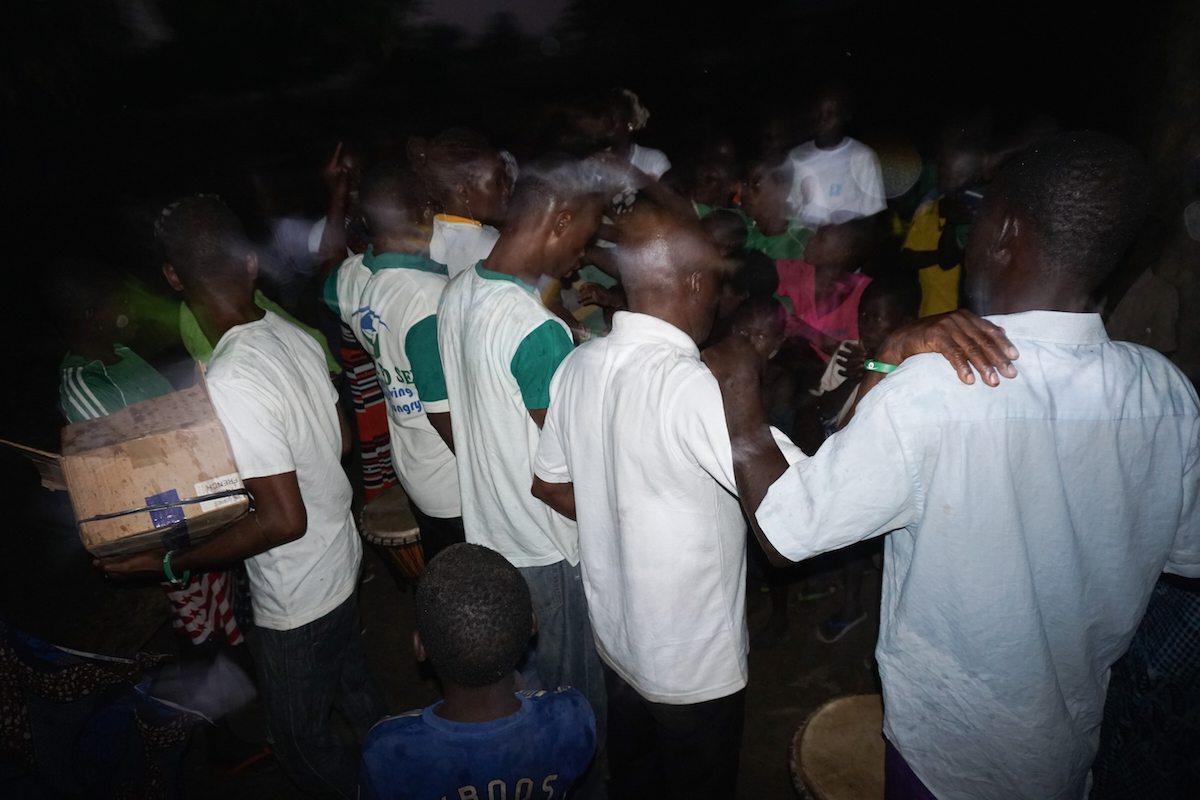 This is the beginning of a brand-new house church in the village of Landa.

Matthew 5:6 says “Blessed are those who hunger and thirst for righteousness for they will be filled.”

I know that Jesus is filling the people in the village of Landa, because they are hungry for Jesus.

Our ministry team has a long road ahead of them as they walk alongside this new house church. If you would like to see the steps that our team takes in establishing a house church, go to our ministry page. We would love for you to pray for this village.